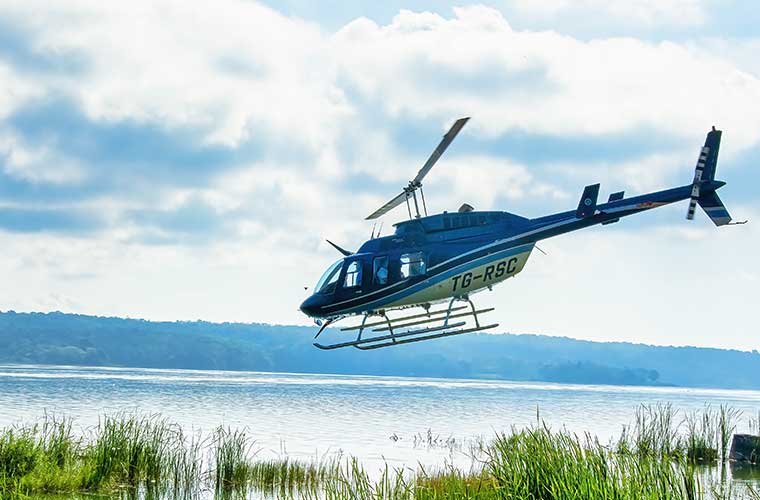 with a daily departure at 9 in the morning.

This fascinating archaeological adventure will increase its departures with two daily flights from December 2021 to April 2022, leaving the first 7:00 and the second at 12:30.

Then it will return from May to November 2022, with a daily flight at 9 am. All flights will depart from Mundo Maya International Airport in Santa Elena, Flores, Peten.

Our travelers this past season have stated that this helicopter tour is a truly exceptional experience.

On this adventure, you will fly over the fantastic ancient Mayan jungle in search of the lost city of El Mirador, a natural wonder proposed as a UNESCO cultural and natural heritage. Although a great variety of wildlife inhabits at El Mirador that you can meet during the trip, it is also worth highlighting that it is one of the most important sites in the entire Mayan World.

The Mirador Heli-Tour is the best-selling helicopter tour that offers you views of Lake Petén Itzá, Flores Island, and the El Mirador archaeological site. Also, make landfall in the lost city of El Mirador and receive a guided tour of the famous Mayan place. In addition, the tour includes a visit to the El Tigre complex, the Los Monos Group, and the Garra del Jaguar Temple, which exhibits decorated masks more than three meters high by two meters wide.

In 1926, the site was first photographed from the air 1930. However, it is a very remote site that would take days to reach by car and foot. It is deep in the rainforest. It wasn’t until the 1970s that archaeological research was carried out there.

Archaeologists were surprised to discover that much of the construction at El Mirador was not contemporary with other classical Mayan cities in the area, such as Tikal and Uaxactún. Instead, they determined that El Mirador dates back centuries before.

El Mirador flourished from the 6th century BC, reaching its apogee in the 3rd century BC. It appears to have been abandoned in the late 9th century AD.

To learn about our El Mirador helicopter tours, visit: www.elmiradorhelicoptertours.com

If you have any questions, a person from our local travel advisors will always be happy to assist you.